Originally posted on climatecontrarian:
Instant Karma is rare – much rarer than strokes, heart attacks, blood clots, neurological disorders, stillbirths, myocarditis, etc. When it strikes twice in a week, live on TV, with the whole world able to tune in, you have to wonder if there is some sort of divine providence at play, you…

They Live : Facebook Fact Checkers are Really Narcissists and Psychopaths

I often search on Twatter for stories and as I have done for well over a decade now, read the comments. Whilst there are legions of bots, many pushing CCP propaganda, and shills acting like arseholes defecating on everything, occasionally you can learn something or see an interesting link or thread and go down a […]

American liberals are obsessed with finding ways to silence and censor their adversaries. Every week, if not every day, they have new targets they want de-platformed, banned, silenced, and otherwise prevented from speaking or being heard… For years, their preferred censorship tactic was to expand and distort the concept of “hate speech” to mean “views that […]

Jimmy Dore is a left wing political commenter who believes the United States is an oligarchy dominated by two corporate parties that are unaccountable to the general population. He is joined by Max Blumenthal an American journalist, author and blogger… formerly a writer for The Nation, AlterNet, The Daily Beast, Al Akhbar, and Media Matters […]

Dehumanising. Othering. Formenting disgust. See where we are being led? This is a dark, dark road we are on. Stand in the light again and say #NoMore

WUWT has a damning dissection of the Met Office’s latest papers by Bob Tisdale. It’s long but worth reading every word.

Current observations are not detailed enough or of long enough duration to provide definitive answers on the causes of the recent pause, and therefore do not enable us to close the Earth’s energy budget.

Yet they are certain global warming is at fault?
Read the rest here

Taken Friday evening in Reading Town Centre a good twenty-four hours ahead of the storm systems.

Amazing I haven’t seen this in the Mainstream Media.

Are they trying to hide the decline?

Realistically each nation should be dispassionately  evaluating their resources utilising a considerate, realistic approach to the environmental, social and economic impact energy extraction will have – encompassing all elements in the spectrum just as long as no bio fuels are involved. Feeding people with the technology and transport systems we have evolved is a gift not a curse. As it is the polarised lobbying from all vested sundry of the debate create a pea soup media fog.

END_OF_DOCUMENT_TOKEN_TO_BE_REPLACED

According to a local station on wunderground, local daytime temps exceeded 28C, reaching a high of just under 35C which would be an all time record if the station was any where near the established standard. On average the wunderground stations are 2-3C above official Met Office weather stations, due to siting issues and massive UHI from an abundance of concrete and asphalt.  As it is, over at Tallbloke’s Talkshop Tim Channon has spent a long time looking at official stations, hardly pristine sites, and found them wanting. The Met Office have made much of this recent spell of high pressure heat, running updates on their site about the “highest temperature this year”.

So they are using a magical 28C as a marker.

Bit of bother there… they ain’t got no consistent stations nor equipment.How about revealing the raw evidence, all of it?

I concur. Hot yes but within expected parameters for these shores.

This is the past four days of local station data of dubious quality but still useful to see changes. The thick blue line is to show the time above 80F and the ‘amplitude’ change as the heat and clear skies were broken by storms which came 22nd- although it did not rain until here until the early hours of the 25th* although other localised storms have passed passed close enough to see, hear and smell.

* the system of storms coming from N France appeared, on the radar, to split along the M3 with energy diverted mostly to the West with some East towards North and West London. This picture is looking West. Most of the real action followed a few hours later, this was merely the scouting party.

There were originally three  building in the area circled which were sheared off. The two almost verticle spears of cloud (left of circle) seem to show the wind shear which may be due to topography or general instability. I’m inclined to the former causing the later based on previous storm systems clipping. The day started with a NNE flow which drifted to SW with the arrival of the weather system pictured.

The theory is that CO2 can describe any existent climate phenomena. You would honestly think that these things never happened before…almost.

I do wish academics would look at history before making their pronouncements.The UK is currently in a highly benign climatic period. The weather was FAR worse prior to 1850 and more especially in the LIA periods1228 inundations of rivers in Dec Jan and Feb –in Worcester- such that no one then living had ever seen the like in their time1229 severe winter ‘unusually bitter, waters so frozen horsemen could cross upon the ice, great snow afterwards earth covered for several days.’1231 March to October hardly any rain anywhere in England-great drought1233 wet summer from 23 March with great inundations of rain through the whole summer destroying warrens and washed away the ponds and mills throughout almost all England. Water formed into lakes in middle of the crops where the fishes of the rivers were seen to great astonishment and mills were standing in various places they had never before been seen.1233-1234 severe frost from Christmas 1233 to Feb 2 1234 destroying roots of trees to four foot down then rest of year very unseasonable1234 third unseasonable yearWet weather in autumn choked the seed and loosened it.1236 great floods in Jan, Feb and part of March that no one had seen the like before. Bridges submerged, fords impassable, mills and ponds overwhelmed and sown land meadows and marshes covered. Thames flooded palace of Westminster so small boat could be navigated in the midst of the forecourt. And folk went to their bed chambers on horsebackFollowed by dry summer with intolerable heat that all lasted four months. Deep pools and ponds were dried up and water mils useless.1237 great rains in February, fords and roads impassable for 8 successive daysTurbulent year stormy and unsettled1238 great floods in many parts probably DecemberCloudy and rainy in beginning until spring had passed then the drought and heat were beyond measure and custom in two or more of the summer months. Great deluge of rain in the autumn that straw and grain became rotten and an unnatural autumn which is held to be a cold and dry season gave rise to various fatal diseases.1239 very wet weather continually from Jan to March, it has continued for four months without intermission.

The IPCC, in painful contrast to Dr. Scafetta, only justifies its continued existence if it continues to produce blood-curdling reports regardless of what is not happening in the real world. Yvo de Boer, who was until recently in charge of that clattering train, came out a few days ago with a statement that the Fifth Assessment Report of the IPCC will be really, really scary. It is that vicious and calculated exploitation of ordinary people’s fears for the sake of personal and political profit that we should vigorously condemn until its perpetrators have been flung from office…

The Solar Lunar Action Technique of Piers Corbyn uses predictable cycles for forecasts many months in advance. A cycles analysis is also much favoured over at TallBloke’s Talkshop, who have a truce with WUWT by virtue of a mutual interest in surface station analysis.

Anthony Watts on July 23, 2013 at 7:06 am
For the record, I was aware of Dr. Scaffetta’s latest paper several days ago. I chose not to run it because like Willis, I saw the seeds of cyclomania in it. Dr. Scafetta’s motives are noble, but his methods are the issue.

It is tempting to find cycles in data, the human mind looks for such patterns naturally, just as we see shapes in clouds. Certainly there’s nothing wrong with either, but as with predicting what the next cloud will look like based on previous cloud patterns (bunny, dog, bird, flower, angel) so it is equally difficult to predict the next climate pattern based on previous ones.

As the tide is turning against man made warming, so to could ‘cycle denial’. There’s a surging current of alarm that we’re headed for a food doomsday by 2050—that the world’s food-producing capacity will crash before population peaks at 10 billion. Don’t you believe it! Smart technology and better management policies will let us feed the hungry hordes to midcentury and beyond. —IEEE Spectrum, Summer 2013

World total cereal production is forecast to increase by about 7 percent in 2013 compared to last year, helping to replenish global inventories and raise expectations for more stable markets in 2013/14, according to the latest issue of the UN Food and Agriculture Organization’s quarterly Crop Prospects and Food Situation report. —Food and Agriculture Organization of the United Nations, 11 July 2013

Looks like the heat wave is about to break with notable conditions over the next 3 days (writing this Sunday evening).

On Sunday evening, a 6.5 earthquake shook central parts of the country.

The epicenter was reported 52 km (32 miles) south-southwest of Wellington, the second biggest city in New Zealand. Dramatic shaking was felt in other cities, from Blenheim and Seddon to smaller tremors in areas much further away, including Christchurch.

Aftershocks were also felt following the rather strong quake

Sunday morning’s quake followed a series of smaller earthquakes from  Friday and Saturday that spawned checks of a few buildings in Wellington. 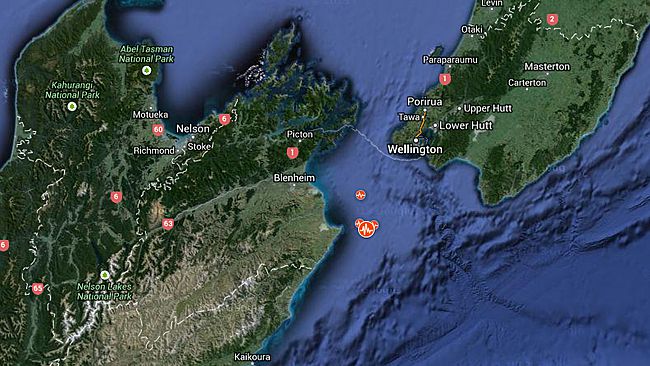 Only minor damage was reported with this quake, with things falling off of shelves and some power outages.

Because the offshore earthquake was below a 7.5 on the Richter Scale, no tsunami threat has been considered.

A GSN Science seismologist, Anna Kaiser, told The New Zealand Herald that it is not uncommon for earthquakes in…