I have been waiting to update the situation with regard to the flooding of the Somerset Levels. I had hoped to include the rainfall data for the local station at Yeovilton, but the Met Office still have not issued them yet. I have chased, but they say, understandably, they are too busy at the moment.

However, we can look at the numbers for the region, SW England & S Wales.

Let’s just recap the background. The problems started with heavy rainfall in the 2nd week of December, after a much drier than normal November. (The Levels are marked on the map below in red – to the best that my limited artistic talents allow!)

At the local station of Yeovilton, about 20 miles south, Met Office figures show that rainfall in November was 23% lower than normal. Given this, and the dry summer, river levels should… 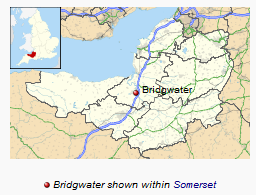 There’s quite a hullabaloo in the UK as the Met Office tries to link recent flooding in Bridgwater , Somerset with global warming, with Lord Lawson even calling Met Office Julia Slingo’s claims “absurd” . Josh even has a cartoon at Bishop Hill about it.

But, even more instructive than the row is this historic map that shows flooding would likely be a normal occurrence in Bridgwater in the county of Somerset, UK, located on this map at right.

Now look at this map from 878AD. “Swamp or Alluvium” anyone? The arrow notation is mine.

In a context which does not go back all that far, but a definite wet and windy spell that is starkly not Mediterranean 😉

As the UK’s run of exceptionally wet and stormy weather continues, the Met Office’s National Climate Information Centre has looked at how the last two months compare in the historical records.

Here’s some facts and figures for the weather we’ve seen through December and January:

As the unsettled UK weather continues this week, the Met Office’s National Climate Information Centre have looked at statistics for this winter so far (from 1 December to 10 February).

These add to previous facts and figures we put out earlier this week, and show a picture of continuing exceptional rainfall across many areas.

Looking at regions around the UK, these provisional figures suggest the region of SE and Central S England has already exceeded its record winter rainfall in the series back to 1910. It is currently at 439.2mm*, less than 2mm above the previous record set in 1915 with 437.1mm of rain.

For the UK as a whole, and also for Wales, both are fairly close to their respective record wettest winter levels in the national series dating back to 1910. Average rainfall for the rest of the month would likely see those records broken.

So much for the warm air (from co2) aloft in the atmosphere meme the MetO and especially Slingo have been banging on about every time we get something out of the ordinary. Interesting you point to the clusters Paul, noted that myself in recent lookbacks at wet periods. The 1929/30 period you highlighted for Slingo may have eased somewhat into spring 1930 but the MetO monthly summaries contained many ‘wet’ headlines into 1931. The 1852 affair was a 5 month episode (not looked at the period either side of that yet). I suppose this is a continuation of 2012, with a dry pause in 2013, before the overarching pattern resumes. Not sure if this links but some very deadly floods in China are clustered around the same periods e.g. 1930s) highlighted. Suggests superficially the jetstream moving from our locale but essentially doing the same thing in another part of the Northern Hemisphere. The major positive is many previous floods had deaths in the 4-6 figure region not double digits like now.

Before anybody gets carried away with claims of “record rainfall” that we keep hearing about in the UK, let’s consider the facts.

Relatively speaking, last month was wetter in England & Wales, but even there it was only the 16th wettest month, on the England & Wales Series, dating back to 1766 . Last month recorded 184.6mm, well short of the wettest month on record, October 1903, which had 218.1mm.

The table below lists the wettest months on the England & Wales series.