As promised, an update on precipitation trends from the England & Wales Precipitation Series , dating back to 1766.

First the annual trends, with a 10-Year Running Average. 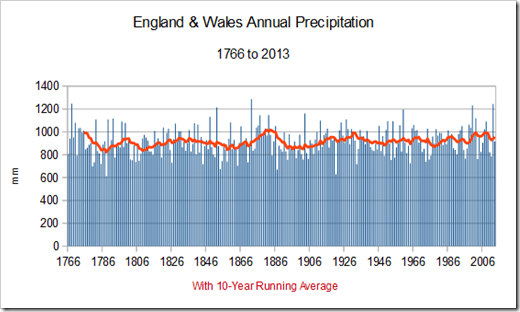 It’s a bit like reading tea leaves, and I have no doubt we’ll all read different things into this. But for me, the following things stand out:

Any sign that rainfall is on the increase? Not for me.

I thought it worth looking at seasonal…

After the early week snowstorm, the eastern half of the United States will welcome a break from frigid temperatures this week. However, some flooding and severe weather are concerns.

The disruptive snow set to cross the Midwest and Northeast through Tuesday will not be followed by a blast of arctic air, which has been all to common this winter.

Instead, a stretch of above-normal temperatures will follow for the middle and latter part of this week across the eastern half of the U.S.

While those in the South will be able to do so, residents farther north should not get ready to break out the shorts.

The deep snowpack that has built up following the recent onslaught of storms will limit how much warming can take place in the Northeast and Midwest.

This wave appeared to the northwest ahead of the band of rain (radar screenshot below), moving on a southwest to northeast axis.

After a relatively quiet week, it looks like some more potent weather may return this weekend.