Guest post from commenter ‘ren’ a friend from Poland with a strong interest in meteorology and some interesting ideas on the relationship between solar activity, cosmic rays, ozone levels and stratospheric pressure systems.

In October 2013 there was a decrease in solar activity, as evidenced by the growth of cosmic rays at that time. 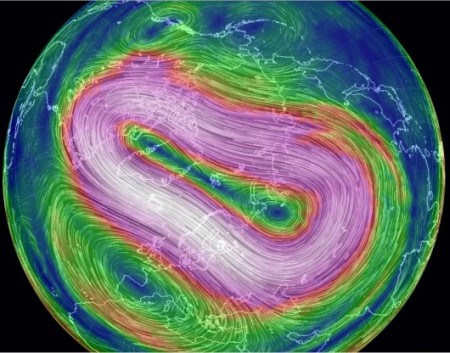 This decline resulted in a short-term rise in temperature in the stratosphere, the ozone zone. 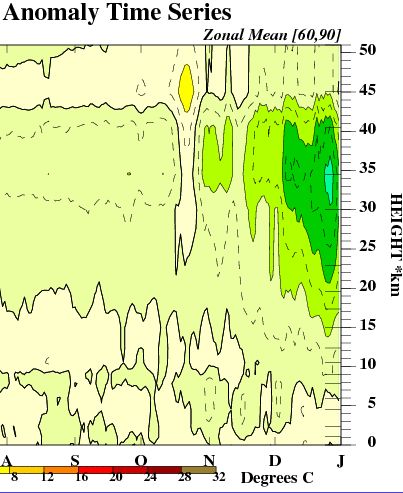 As a result, the temperature rise was halted polar vortex, which is picking up speed in the winter. View.

It is interesting that the inhibition occurred only over eastern Siberia, which indicates that over the area changes in solar activity caused the greatest effect. Smaller solar activity means an increase of ionizing radiation over the Arctic Circle, which in turn affects the reactions taking place in the area of ​​the… 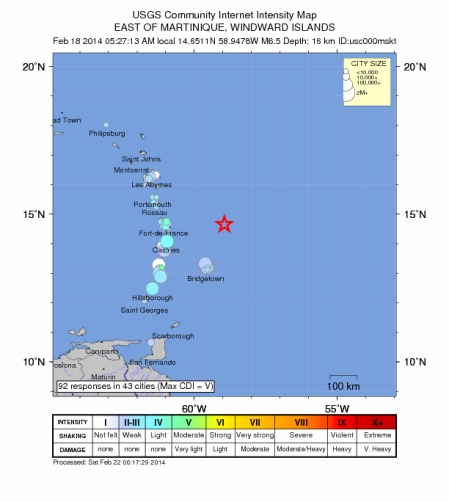 February 2014 – CARIBBEAN – Two earthquakes greater than 5.0 have rocked the Caribbean in the last week and concerns have been growing for a major tremor in the region. On Tuesday, Feb. 18, a strong 6.5-magnitude quake occurred about 100 miles north-northeast of Bridgetown, Barbados. According to Dr. Joan Latchman, the Director of the Seismic Research Unit of the University of the West Indies, it was the strongest tremor since 1980 in the area. Three days later, on Feb. 21, a 5.1-magnitude seismic event occurred near Aruba. While both of these quakes did not cause much damage, they are a reminder that the Caribbean remains a very active seismic zone, prone to earthquakes at anytime. Earthquakes are common in the Caribbean, but most are less than 3.0 on the Richter Scale. The two recent, stronger rumbles have rekindled memories of highly destructive earthquakes over the past few hundred years…

Investigative journalist Tony Thomas emailed me with a new piece he has written for Quadrant Online. It details how Stefan Lewandowsky and David Karoly along with some others have rehashed some old greencrap based on ancient dodgy climate and health models to scare Australian schoolkids with. An instructive read:

Climate Science – How She is Done

A widely touted report detailing the current death toll from rising temperatures — which aren’t rising at all, just by the way — is even more dubious than the provenance of the 14-year-old academic guesstimate on which the current alarms are based.

With the Australian Academy of Science’s climate team now re-writing its 2010 booklet on dangerous climate change, it’s time for a bit of investigation. The original, 24-page booklet went out to nearly a million users, mainly schoolkids and teachers, so the current re-writing team has a heavy responsibility to treat… 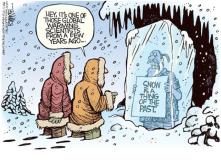 By WUWT Regular “Just The Facts”

For anyone who was witness to the absurdity of the recent warming makes it cold meme, it should come as no surprise that even ardent Catastrophic Anthropogenic Global Warming believers are trying to distance themselves from the meme before it causes more damage. After the White House took a run at it, and the willfully gullible media, e.g. Bloomberg Businessweek, BBC and NPR lapped it up, now everyone, including the scientist credited with starting it, are walking away. Let us start with this Washington Post – Capital Weather Gang article yesterday, “Scientists: Don’t make “extreme cold” centerpiece of global warming argument“:

“It’s an intriguing theory – that recently has gotten legs: the melting Arctic – spurred by global warming – is causing the weather’s steering flow, the jet stream, to become more…

Digging in the Clay

The period between mid-October and mid-November is sometimes called in weather lore “Autumn Rains and Continental Trains” as one area of low pressure after another races across the Atlantic to dump rain on the UK.  This year the trains are running late. Very late (No need for British Rail jokes).

Surf site http://magicseaweed.com/ has posted an amazing animation of approaching storms as shown by wave heights.

“In two and a bit months the North Atlantic has hardly paused in its brutal storm production line.”

Digging in the Clay

This news just in…

After harsh criticism of its seasonal forecasts, and faced with further government cutbacks, the Met Office has developed an inexpensive new forecasting method.

We have had plenty of stormy weather recently, particularly in December 2013, which the Met Office say was the worst month since 1993. Prior to that, both 1984 and 1990 were also much stormier. (The Met Office classify this from the number of stations experiencing above 60Kt gusts each day). 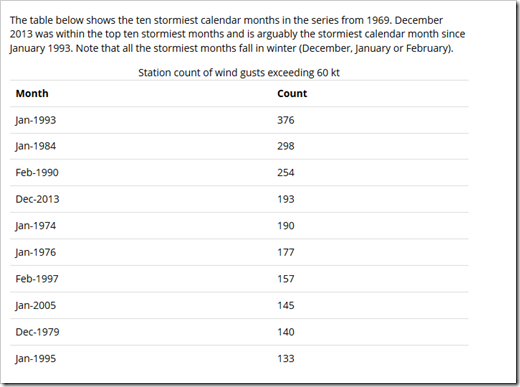 As can be seen, January 1993 was recorded almost twice as many counts as last December. It is also worth noting that only two out of the ten have taken place since 2000, whereas four took place in the 1990’s, and three in the 1970’s. (The measurements only start from 1969).

To get some perspective, let’s take a closer look at the Met Office’s Monthly Report for January 1993. 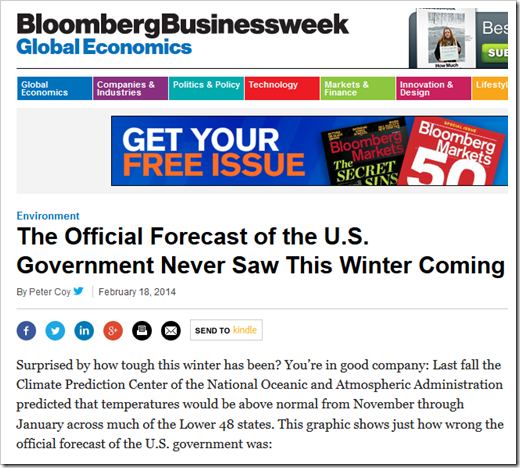 Apparently, it’s not just our beloved UK Met Office that failed so miserably to forecast this winter’s weather. It seems that NOAA did not do any better!

Surprised by how tough this winter has been? You’re in good company: Last fall the Climate Prediction Center of the National Oceanic and Atmospheric Administration predicted that temperatures would be above normal from November through January across much of the Lower 48 states. This graphic shows just how wrong the official forecast of the U.S. government was:

The big red blotch in the top map represents parts of the country in which the Climate Prediction Center forecast above-average temperatures. The frigid-looking blue blotch in the bottom “verification” map shows areas where temperatures turned out to be below average. 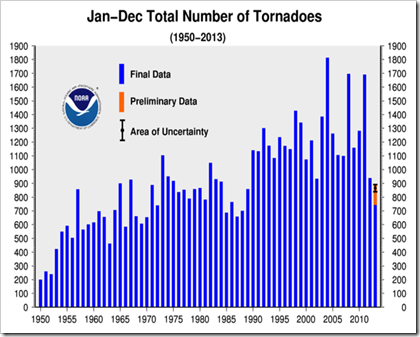 The US tornado data has now been confirmed for last year, and once again I have to correct the highly misleading (and, in my view, deliberately so) graph, put up by NOAA, which I show above.

Anybody looking at this would immediately jump to the conclusion that, although last year was a bit lower than in the recent past, there had been a steady rise in tornado numbers since 1950. Bear in mind that many people never get beyond the headlines.

So, to put the record straight. Many, many more tornadoes get to be recorded these days than even 20 years ago, never mind 60 years. This is because of a revolution in methods of observation and reporting over the years. For instance, Doppler radar was only fully introduced in the late 1990’s. Other factors involve increasing population, tornado spotters, mobile phones, and development of spotter… 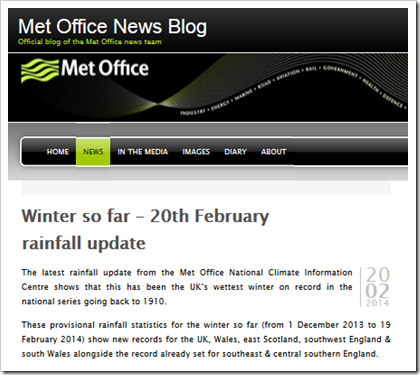 I have now had the chance to fully analyse the latest rainfall numbers put up by the Met Office. Let’s start by looking at the actual numbers up to 19th Feb, and an estimate of where we are likely to be by the end of February. (I do not like to do this sort of speculation, and would much rather wait till the actual numbers are confirmed, However, as the Met Office have set the ball rolling, I have little choice.)

The forecast for the rest of the month is nothing scientific! It just assumes average rainfall, which does not seem particularly out of line with Met forecast. Also, I would point out that the Met Office have not issued any figures for the England & Wales series for February so far – consequently my guesstimate is less certain.