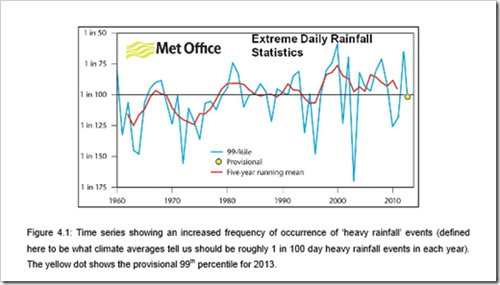 I looked yesterday at the Met Office’s claim that :

There are suggestions, however, that the character of daily UK precipitation has changed over the last 50 years. There is evidence that heavy rainfall events may have become more frequent over time: What in the 1960s and 1970s might have been a 1 in 125 day event is now more likely a 1 in 85 day event (see figure 4.1)

As I pointed out, their time series began in the 1960’s, the start of an unusually dry period. Doing the same exercise, using Oxford data starting in 1930, showed that there was no increasing trend of heavy rainfall events there, and that the rise shown on the Met Office graph was simply part of a cycle.

I also have daily rainfall data from the Met Office for Bradford, which goes back to 1911, giving us a…