Originally posted on climatecontrarian:
This paper has just been published. It’s a preprint so hasn’t been formally peer-reviewed, and that should be borne in mind when analysing its conclusions. Here we report that the Spike protein from severe acute respiratory syndrome coronavirus 2 (SARS-CoV-2) binds to the blood coagulation factor fibrinogen and induces structurally abnormal…

Prior to November 2013 , I think I can safely say that nearly no one knew about this particular island located in the Pacific ocean, about 1000 km south of Tokyo, the nearest islands are part of the Bonin group.
To give an idea of the remoteness of the place, it takes about 26 h by boat from Japan’s mainland to the nearest island.

Much better known due to an historical battle during WWII and an emblematic picture, Iwo Shima, to the south, is itself part of the aptly named volcano islands.

Prior to 1973, the islet was pretty calm as the latest eruption dated back to about 10 000 years. The submarine volcano had been mapped and the island is part of the northwest ridge of the caldera.
The submarine structure is about 3000 m high and 30 km wide at the base. 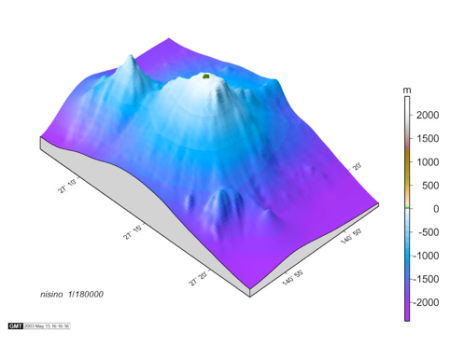