While we’re looking at sea levels, it is worth recalling this paper by Madhav Khandekar in 2009, “Global Warming & Sea Level Rise”. The author pulls together a number of recent studies.

ABSTRACT
Sea Level Rise (SLR) in response to the present and future warming of the earth’s surface is probably the most contentious issue being debated at present. This brief commentary surveys the most recent literature on ongoing SLR and on the major factors contributing to future rise. It is concluded that the best guess value of SLR for the next 100 years is a relatively modest 23 cm +/− 5 cm which poses little threat to coastal areas of the world either at present or in future.

Amazing footage from the ISS, it’s actually part of a documentary. There is also new footage in HD now that NASA has instaled new cameras for the HD Earth Viewing Experiment

The mainstream portray Ernest C Anderson as a mere footnote in history who can be dismissively called “Ernie Anderson” because he was a lowly “graduate student” who doesn’t merit further discussion in Wikipedia.

However, as usual, it’s best to take everything Wikipedia says with a pinch of salt because Ernest C Anderson was far more than a lowly “graduate student”.

Unfortunately at that time no instrument was sufficiently sensitive, so my colleague, Dr E. C. Anderson and I were stumped for the time, until we recalled that an old friend from World War II days had a carbon isotope separator with which he was making concentrated 13C for isotope tracer work in cancer research.
…
Dr Grosse after obtaining the sewage methane proceeded to enrich it to varying degrees (as measured by the 13C enrichment) and Dr Anderson and I excitedly put the enriched methane in our proportional counter…

Doing science by consensus is not science at all, says the climatologist all the alarmists love to hate. Not that the enmity bothers Judith Curry too much — and certainly not as much as the debasement of impartial inquiry by which the warmist establishment keeps all those lovely grants coming.

Over the past few years, government experts have reversed many climate stories in order to fall in line with government objectives.

During 2003 to 2008, the mass gain of the Antarctic ice sheet from snow accumulation exceeded the mass loss from ice discharge by 49 Gt/yr (2.5% of input), as derived from ICESat laser measurements of elevation change. The net gain (86 Gt/yr) over the West Antarctic (WA) and East Antarctic ice sheets (WA and EA) is essentially unchanged from revised results for 1992 to 2001 from ERS radar altimetry

Since then, Antarctic sea ice has also set… 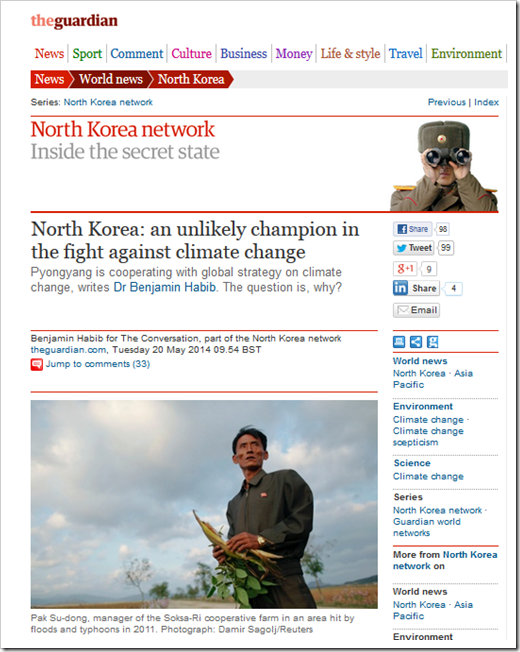 Just when you thought the Guardian could not get any worse!

When we think of North Korea, we think of a nation determined to be an outsider in the international community. Whether it’s testing nuclear weapons or threatening London hairdressers, the Democratic People’s Republic of Korea is not usually associated with compliance.

But there is compelling evidence that the North Korean government is motivated by domestic power games to co-operate globally on climate change.

North Korea has a record of compliance with its obligations as a party to the United Nations Framework Convention on Climate Change. The obvious question then is why the North Korean government would show such commitment to the international climate change regime, given its belligerent reputation in the strategic realm.

The most obvious link is between environmental degradation, the vulnerable agricultural system and the stability of governance in North Korea…

The Met Office’s Chief Scientist, Professor Dame Julia Slingo, is appealing for an end to personal attacks on scientists – no matter what their viewpoint on the climate debate.

Her call follows recent articles in the media claiming that some scientists have felt pressured due to their views.

Professor Lennart Bengtsson, a research fellow at the University of Reading, featured in the articles after saying he was worried by a wider trend that science is being ‘gradually influenced by political views’. You can read a statement from him and other climate scientists in response to the articles on the Science Media Centre’s website.

In a letter, published in The Times today, Professor Dame Slingo says scientists should be free to review and debate their research without fear of personal attacks.

You can read the full letter below:

Your articles on the recent events surrounding Prof. Lennart Bengtsson are…