New Zealand provides a rare long temperature time series in the Southern Hemisphere, and it is one of the longest continuous climate series available in the Southern Hemisphere Pacific. It is therefore important that this temperature dataset meets the highest quality control standards. New Zealand’s national record for the period 1909 to 2009 is analysed and the data homogenized. Current New Zealand century-long climatology based on 1981 methods produces a trend of 0.91 °C per century. Our analysis, which uses updated measurement techniques and corrects for shelter-contaminated data, produces a trend of 0.28 °C per century.

This is some of the background about the ‘neutral’ scientists leading the war on climate. From New Zealand Climate Change, this goes beyond “noble cause corruption”. This is outright malicious interference with the scientific process, and it’s damned ugly. I can’t imagine anyone involved in professional science who could stand idly by and not condemn this.

Climategate 2 and Corruption of Peer Review

The post here is a follow-up from my last post on some Climategate 2 emails, which I have tied together into a kind of narrative. Why should you read this? It is very simple. There are plenty of articles, views etc. out there claiming that the climategate 2 emails are being taken out of context. I have also seen Phil Jones has been saying that it is just the normal ‘to and fro’ of normal scientists going about their business etc. etc.

This is most certainly not the case in the emails that follow. There really is no hiding place for… 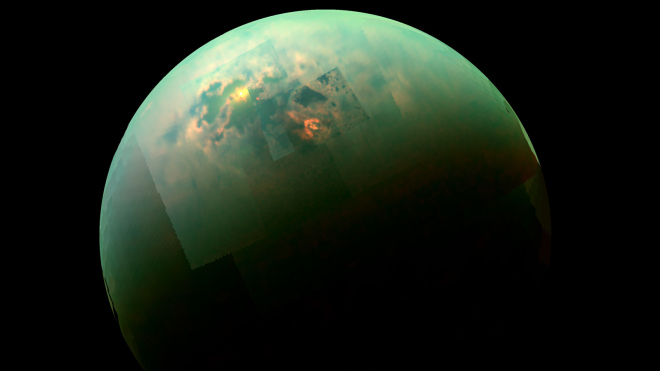 This near-infrared, color view from Cassini shows the Sun glinting off of Titan’s north polar seas.

In the past, Cassini had captured separate views of the polar seas and the Sun glinting off them, but this is the first time both have been seen together in the same view.

Also in the image:

– An arrow-shaped complex of bright methane clouds hovers near Titan’s north pole. The clouds could be actively refilling the lakes with rainfall.

– A “bathtub ring,” or bright margin, around Kraken Mare — the sea containing the reflected sunglint — indicates that the sea was larger at some point, but evaporation has decreased its size.

Titan’s seas are mostly liquid methane and ethane. Before Cassini’s arrival at Saturn, scientists suspected that Titan might have…