One of the most pathetic things about climate alarmism is the fact that it seems the people who profess such views have no capacity to be ashamed of their own statements. For example, Brad Johnson, who is a paid spokesman for a shadowy outfit called “forecast the facts” has previously made outrageous statements trying to link tornado activity to the voting record of some southern states.

We’ve called him out on these claims before, but being paid to do it he does, he’s right back at it this week with an even more outrageous claim as seen below on his Twitter feed:

Johnson is a paid political advocate, his job is to scare up emotions with whatever statements he can muster so that it can be regurgitated by low information voters even though there’s not one speck of truth in anything he has ever said in this matter of…

We hear a lot about CO2 as climate’s “control knob, but about the oceans’ pacemaker, AMOC? Not so much.

In the Water World post, I referenced the match between SSTs (sea surface temperatures) as recorded in HadISSAT and the IPO, an index of SSTs in the Eastern Pacific: North, Central and South. This is a brief discussion of the Atlantic role in shaping climate patterns, especially in Europe and North America.

Since global average temperatures are dominated by the oceans as measured by SSTs, it is significant that multidecadal cycles are presently shifting from warmer phases to cooler. The PDO entered its cooler period recently, and the current weak El Nino is evidence of this. (Pacific Decadal Oscillation is an index of Northeastern Pacific based upon ~30-year periods, warm when El Ninos dominate, and cool when La Ninas rule.) 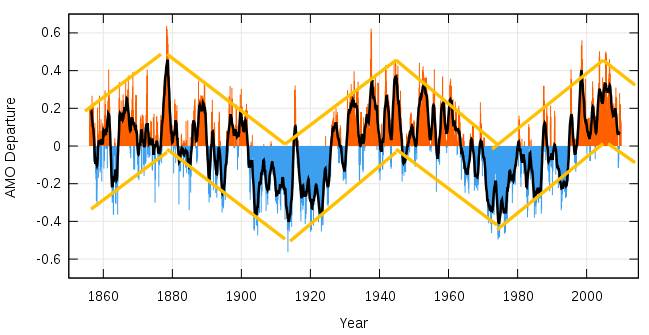